Three Cairns Group is a venture-oriented investment firm committed to deploying capital to accelerate the global transition to a low-carbon economy. Three Cairns Group is focused on climate-related venture capital investing, the development and execution of high-impact climate initiatives, and the use of strategic philanthropy to drive scalable change. Three Cairns Group was co-founded by Mark Gallogly and Lise Strickler in 2015.

Mark recently returned to the private sector after serving at the U.S. Department of State as an Expert Senior Advisor to Special Presidential Envoy for Climate John Kerry.          Mr. Gallogly’s focus was on engaging the private sector and financial institutions in climate action. Before serving in government, he had a 35-year career in investing. In 2005, Gallogly co-founded Centerbridge Partners, an investment firm with $28 billion of assets under management that deploys capital in private equity, real estate, and credit investing. He retired from Centerbridge in December 2020. Prior to Centerbridge, he worked with the Blackstone Group for 16 years, where was the head of Global Private Equity and was a member of the firm’s management committee.

Mr. Gallogly served on President Obama’s Council on Jobs and Competitiveness from 2010 to 2012 and on the President’s Economic Recovery Advisory Board from 2008 to 2010. Mr. Gallogly has served on numerous public and private corporate boards of directors, as well as the boards of several not-for-profit institutions. He currently is the Vice Chair of the Board of Trustees of Columbia University. He earned his Bachelor of Arts from the University of Notre Dame and his Master of Business Administration from Columbia University. 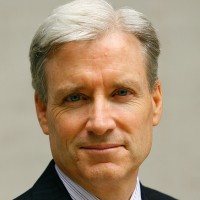