Jeh Johnson is a partner in the law firm of Paul, Weiss, Rifkind, Wharton & Garrison, LLP and the former Secretary of Homeland Security.

Johnson has been affiliated with Paul Weiss on and off since 1984, became the firm’s first African American partner in 1994, and is currently a member of the firm’s Management and Partnership Committees.  Early in his legal career Johnson became a seasoned trial lawyer, and in 2004 was elected a Fellow in the American College of Trial Lawyers. Johnson now advises corporate clients on the legal aspects of national security, cybersecurity, data privacy and government relations.

Johnson is on the board of directors of Lockheed Martin and U.S. Steel.  In private life Johnson is also a commentator on national and homeland security matters on ABC, CBS, NBC, PBS, MSNBC, FOX, CNN, CNBC, NPR, Bloomberg TV and other news networks.  Johnson is also the author of numerous op-eds in The Washington Post and The Hill, and since leaving office has testified routinely before Congress on the subject of homeland security and cybersecurity.  In June 2020 the Chief Judge of New York asked Johnson to undertake a comprehensive review of racial bias in the state court system.  On October 1, 2020 Johnson delivered a 100-page public report with a number observations and recommendations, all of which the Chief Judge will adopt.

Johnson is the 2018 recipient of the Ronald Reagan Peace Through Strength Award, presented at the Reagan Presidential Library, for “contributing greatly to the defense of our nation,” and “guiding us through turbulent times with courage and wisdom.”

Johnson has debated at both the Cambridge and Oxford Unions in England, and in November 2019 was conferred honorary life membership in the Cambridge Union.  He is also the recipient of eleven honorary degrees. He has also lectured at Westminster College, Harvard and Yale law schools, the Harvard Kennedy School, the National Defense University, the National War College, and all four U.S military academies. In his final days as General Counsel of DoD, Johnson delivered an address at the Oxford Union entitled "How Will the War Against al Qaeda End?" The address received international attention and acclaim.  On September 11, 2020 Johnson was the convocation speaker at Liberty University, where he spoke of the importance of character and morality in leadership.

As Secretary of Homeland Security, Johnson was the head of the third largest cabinet department of the U.S. government, consisting of 230,000 personnel and 22 components, including TSA, Customs and Border Protection, Immigration and Customs Services, U.S Citizenship and Immigration Services, the Coast Guard, the Secret Service, and FEMA. Johnson's responsibilities as Secretary included counterterrorism, cybersecurity, aviation security, border security, port security, maritime security, protection of our national leaders, the detection of chemical, biological and nuclear threats to the homeland, and response to natural disasters.  In three years as Secretary of DHS, Johnson is credited with management reform of the Department, which brought about a more centralized approach to decision-making in the areas of budgets, acquisition and overall policy.  Johnson also raised employee morale across the Department, reflected in the September 2016 Federal Employee Viewpoint Survey.

Prior to becoming Secretary of Homeland Security, Johnson was General Counsel of the Department of Defense (2009-2012).  In that position, Johnson is credited with being the legal architect for the U.S. military’s counterterrorism efforts in the Obama Administration. In 2010, Johnson also co-authored the report that paved the way for the repeal of the Don't Ask, Don't Tell by Congress later that year. In his book Duty, former Secretary of Defense Robert Gates wrote that Johnson "proved to be the finest lawyer I ever worked with in government - a straightforward, plain-speaking man of great integrity, with common sense to burn and a good sense of humor."

Earlier in his career, Johnson was General Counsel of the Department of the Air Force in the Clinton Administration (1998-2001), and an Assistant United States Attorney for the Southern District of New York (1989-1991) where, in three years he tried 12 cases and argued 11 appeals. 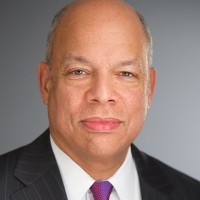